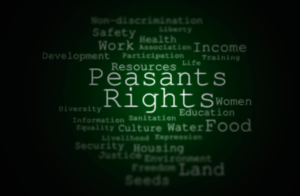 There is the International Conference “Towards the UN Declaration on Peasants Rights and Other People Working in Rural Areas” has been held on March 27, 2018 in the facilities of the Institute for Economics and Forecasting of the National Academy of Sciences of Ukraine.

The organizers of the Conference were European Coordination LA VIA CAMPESINA, Ukrainian Rural Development Network and Institute for Economics and Forecasting NAS Ukraine.

The Conference has been held due to involving representatives of the diplomatic mission of Bolivia, the Ministry of Agrarian Policy and Food of Ukraine and other officials. Also, there are numerous representatives of Ukrainian civil society, farm organizations, Ukrainian and international public organizations and institutions from Poland, Romania, the Netherlands, Belgium, Austria have taken part in the Conference, in particular, members of the Global International Movement La Via Campesina (initiator of the UN Declaration on the Peasants Rights and Others People Working in Rural Areas).

The Conference adopted a resolution on support for the draft Declaration, which calls for the highest authorities in Ukraine to facilitate its adoption by the United Nations. The adoption of the Declaration will become a substantial institutional basis for implementation of the proclaimed by the Government course on formation of European model of farm structure in Ukraine and protection human rights of Ukrainian people working as migrant agricultural workers abroad.

Taking into considerations the growing economic marginalization of rural population as a result of economic and social transformations, as well as impact of climate change, peasants are forced to seek solutions to their problems at the highest level by discussing possibilities of using a powerful international instrument for the protection of human rights. To this end, in the early 2000s, the Global International Movement La Via Campesina representing more than 200 million peasants from different countries and continents, had initiated the process of developing and adopting the Declaration on the Peasants Rights and Other People Working in Rural Areas by the United Nations. For the countries of Eastern Europe, especially for Ukraine, where significant part of the population lives and works in rural areas, the protection of peasants rights is of crucial importance.

The draft Declaration is currently under discussion in the specially created Open-ended Intergovernmental Working Group (OEiWG), which is part of the UN Human Rights Council in Geneva. In April 2018, an OEiWG session should take place, where it is planned to agree on the final version of the draft Declaration. It is anticipated that the adoption of the Declaration will facilitate the establishment of international legal instruments that will help protect rights of peasants and other people working in rural areas, and will draw attention to issues such as discrimination of this category of people. Ukraine and other Eastern European countries consolidated by the common problems of peasants and rural residents, and they have an opportunity to jointly support adoption of the Declaration, protecting rights of those who create our history and form the basis for sustainable development.

Resolution on support for the draft Declaration (PDF) 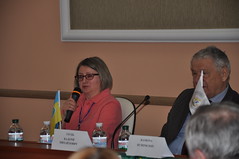